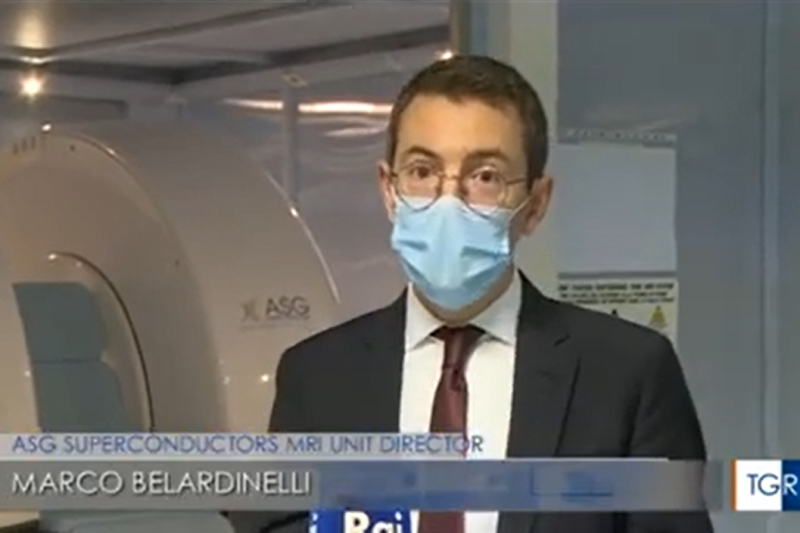 TGR Liguria - ASG Superconductors: a new approach to the future of cancer treatment

Towards live imaging in proton therapy

ASG Superconductors with Helmholtz-Zentrum Dresden-Rossendorf (HZDR) will build the world’s first prototype that tracks moving tumors with magnetic resonance imaging (MRI) in real time during proton therapy, combining a rotating open MRI device for the LINAC-MR system Alberta Health Services, with an actively scanned clinical-akin proton beam at OncoRay, the Dresden-based National Center for Radiation Research in Oncology. The rotating MRI device is produced by ASG Superconductors, using the MROpen Evo technology-based helium-free superconducting MgB2 magnet. Real-time MRI would make it possible to synchronize the proton beam to tumor motion during radiation dose delivery. So far, this has been impossible and therefore was a limiting factor for treating moving tumors with this promising cancer therapy.

Enabling the future of human brain research with Siemens Healthineers

From Genoa to Korea and the USA: the world´s most powerful magnet for studying the brain is Italian

Superconductors, the ASG wire for fission and fusion in safety

Superconducting magnets: all applications for industry. With ASG Superconductors

TGR Liguria - ASG Superconductors: a new approach to the future of cancer treatment

ASG will provide magnets for a new proton therapy system

Talking about fusion energy and DTT

France is working on the nuclear fusion of the future

ITER, the machine that will light up a mini sun

Fusion, ready the heart of the new Italian super magnet

From La Spezia the super magnet, the Italian heart of nuclear fusion

ASG, those thirty Ligurians working in France for the energy of the future

The italian super magnet is ready

Made in Italy for fusion project in France

The superconducting wire made in Italy for CERN

The energy of the stars. The coil for fusion comes from La Spezia

Clean energy from a simulated sun

The superconducting cable developed in Liguria to revolution energy transport

Nuclear fusion in Europe with the italian high-tech

ASG, the iter of superconductors

Fifty companies for a "Made in Italy" sun

Nuclear Fusion made in Italy

The supermagnet on the way

Fabbrica 2.4 Davide Malacalza interview - The biggest magnet in the world

The magnet of wonders

ItaliaBringing the Sun on Earth?

ASG Superconductors brings the magnet made in Italy to Russia

The Italian super-magnet is born

Magnet for nuclear fusion made in Italy

Even the Sun will end up in a box

Even the Sun will end up in a box

The Sun in a box: from the ligurian Silicon Valley, Davide Malacalza: now let's draw the future

Nuclear fusion closer with the italian supermagnet of Malacalza and Enea

ASG, Saes and SME at CERN. Made in Italy at service of science

Fusion, Enea in Japan to start working on magnetic system

Fusion, the Malacalza company ASG arrives in Japan for the experimental reactor

ASG Superconductors, the superconducting coils for the nuclear plant in Tokyo

The reactor that speaks Genovese is born in Japan

thanks to Enea Italy brings excellence for fusion in Japan

Fusion, Enea started assembly the "heart" of the experimental reactor

Japan, Enea and Italian companies in the reactor for the energy of the stars

Technology to treat tumors is Italian, but used just abroad

Treasury of excellence not to be lost

La Spezia, new contract in Korea for the ASG of Malacalza

Here is the company that imitates sun and stars: the minister Orlando to ASG Superconducors

"Betrayed research." Investigation on the situation of the Italian research. The activities of the INFN. Int. Fernando Ferroni, pres. INFN

ITER , the experimental reactor that will change our history

The energy cradle will contain plasma to 150 million degrees

The super magnet for nuclear plant comes from Liguria

Energy: ITER fusion project, one of the largest magnets and complex ever built comes from Italy

Manufacturing one of the biggest and most complex magnets in history

What are we doing. Invisible particles, but that are changing our lifes

A piece of Italy in the international experiment Mu2e at Fermilab

Sun in the room

A Genoese company is working on the new Cern magnet

Research, investments and managers The recipe for the Malacalza hi-tech superconductivity chain