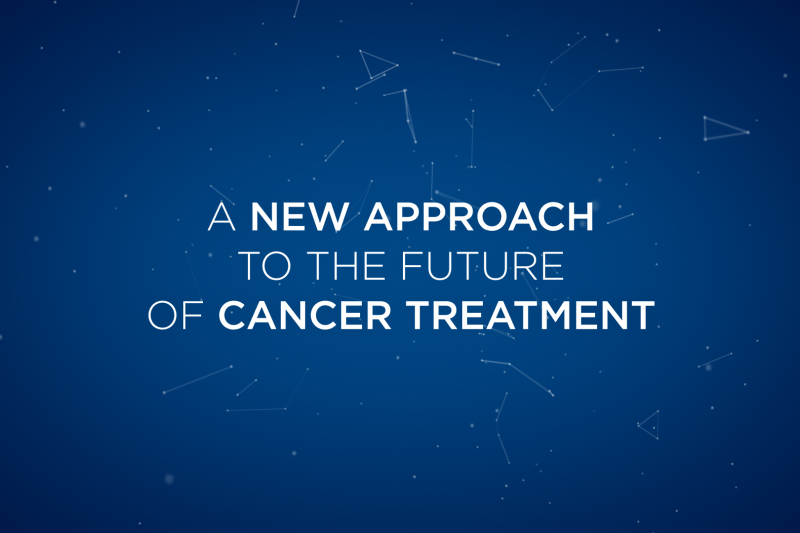 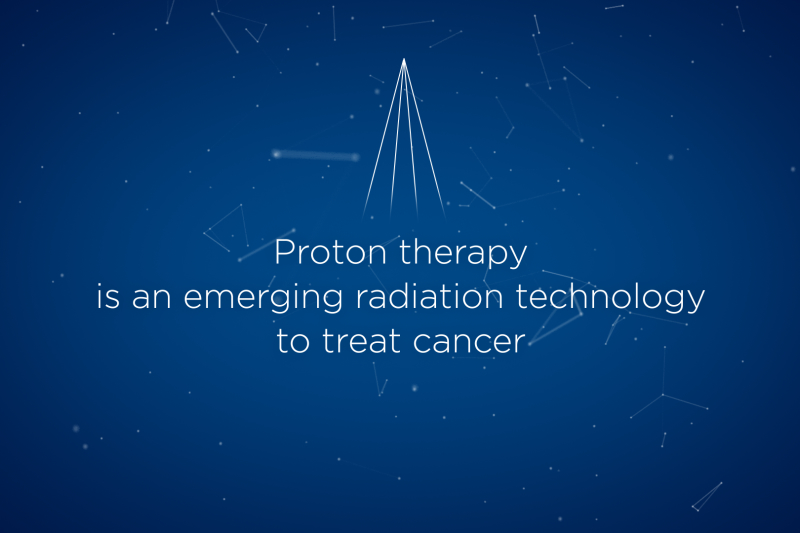 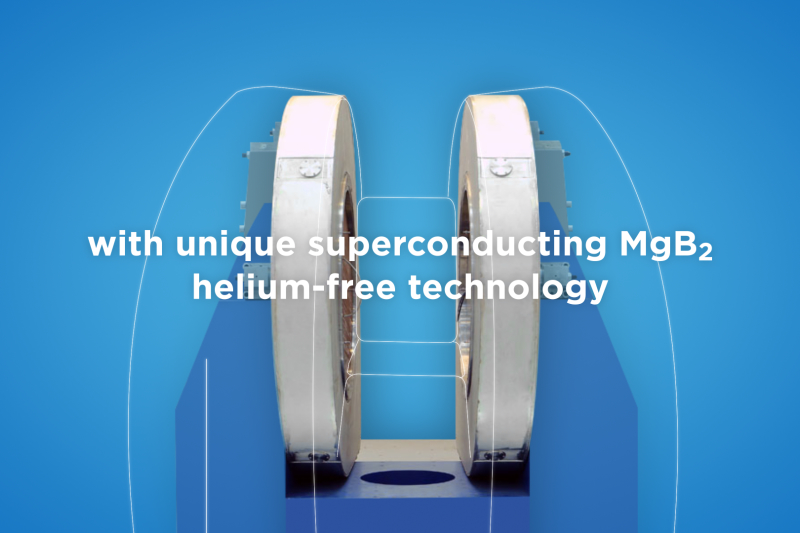 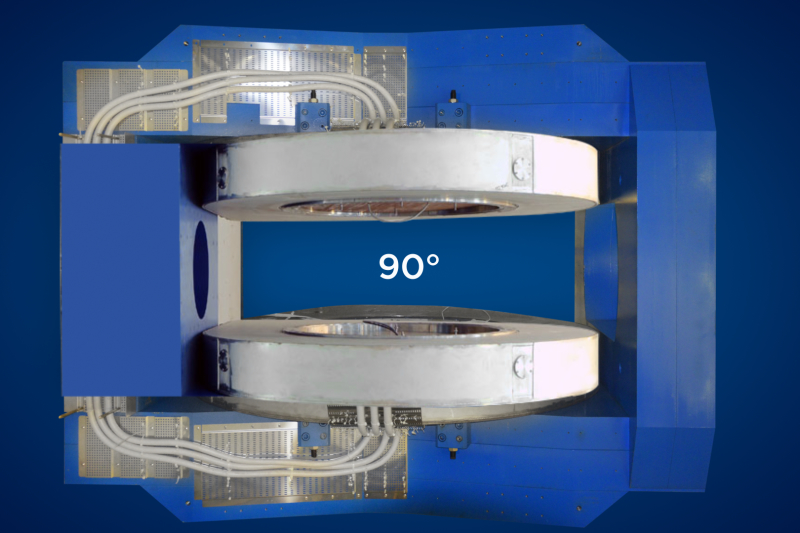 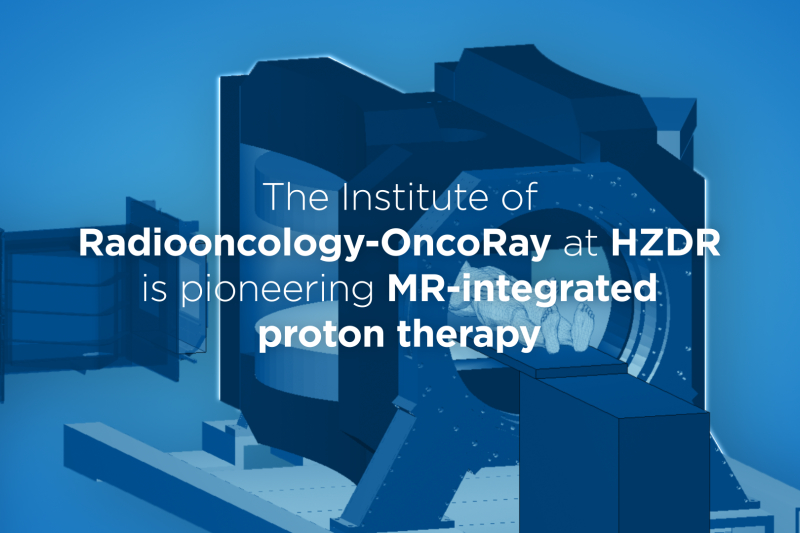 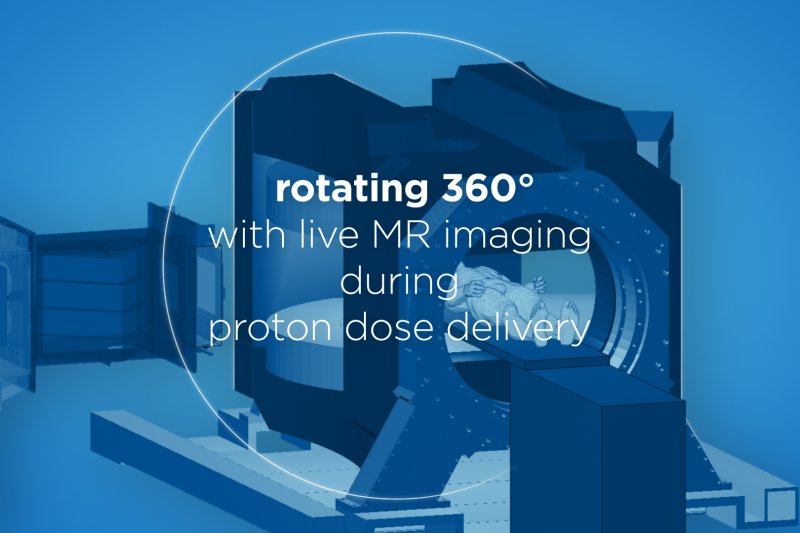 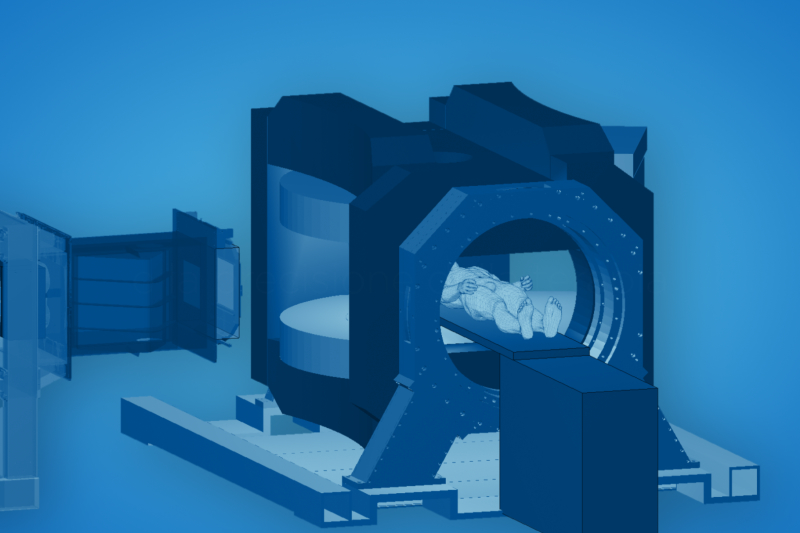 Researchers at the Helmholtz-Zentrum Dresden-Rossendorf (HZDR) want to build the world’s first prototype that tracks moving tumors with magnetic resonance imaging (MRI) in real time during proton therapy. They are combining a rotating open MRI device, designed for the LINAC-MR system from Alberta Health Services, with an actively scanned clinical-akin proton beam at OncoRay, the Dresden-based National Center for Radiation Research in Oncology. The rotating MRI device is produced by ASG Superconductors, using their helium-free superconducting magnesium diboride (MgB2) magnet. Real-time MRI would make it possible to synchronize the proton beam to tumor motion during radiation dose delivery. So far, this has been impossible and therefore was a limiting factor for treating moving tumors with this promising cancer therapy.

Watch the video: Towards live imaging in proton therapy

Proton therapy is an emerging radiation technology to irradiate tumors while sparing the surrounding tissue better than conventional X-ray-based radiation due to the finite penetration depth of the protons. However, the effectiveness of proton therapy is limited by tumor motion, anatomical changes during therapy, and set-up inaccuracies in patient positioning. “With onboard X-ray imaging currently available at the proton therapy system, we do not obtain high-contrast live images of where we are aiming at and what we are hitting,” says Dr. Aswin Hoffmann of the HZDR Institute of Radiooncology – OncoRay, describing the fundamental problem. “Therefore, when we treat moving tumors, we have to use rather large safety margins around the tumor tissue, reducing the targeting accuracy and increasing the risk of side effects in surrounding tissues.”

Especially with tumors that are constantly moving during respiration or digestion, the healthy tissue immediately surrounding the tumor might receive too much radiation dose, while the tumor tissue itself receives too little. Until now, in proton therapy no suitable imaging technology to visualize the tumor and its motion during radiation with high soft-tissue contrast has been available. The solution could be magnetic resonance imaging, which would offer several advantages, as Hoffmann explains: “MRI provides unsurpassed soft-tissue contrast combined with high spatial and temporal resolution. Also, unlike X-ray imaging, MRI doesn’t deposit any additional ionizing dose into the tissue.” However, integrating MRI into proton therapy systems proves to be a major technological challenge. For a long time, so-called in-beam MRI was deemed impossible.

To acquire sharp and geometrically accurate images, MRI scanners operate with precisely predefined magnetic fields. At the cyclotron, the protons are accelerated by a rapidly varying (radiofrequency) electric field and kept to a spiral trajectory by a static magnetic field. During transport into the radiation room, the beam is also guided and kept in shape by magnetic fields. “Experts postulated that these electromagnetic fields would interfere with the MRI scanner and vice versa, distorting the MRI image and impacting the proton dose distribution delivered in tissue,” explains Aswin Hoffmann. In recent years, the medical physicist and his research group have been able to demonstrate, for the first time worldwide, that it is generally technologically possible to combine both systems, to experimentally confirm the presence of these effects, but also to be able to significantly compensate for them. To this end, they placed an open low-field MRI scanner with a magnetic field strength of 0.22 Tesla (MRJ2200 – ASG Superconductors Paramed MRI Unit) into the proton beam path and showed good MR image quality during irradiation with a static beam.

With the new MRI device and its real-time, high-contrast imaging capabilities for organs in the chest, abdomen and pelvis, Hoffmann’s team now intends to build a first prototype which might be used clinically at some stage, as the researcher explains: “What is special about this MRI scanner is that it can be rotated around the patient relative to the beam, allowing us to study dosimetric and biological beam effects for MRI magnetic fields both perpendicular and parallel to the proton beam.” A team of physicists, engineers, and physicians has the opportunity to pursue this unique research in an experimental room adjacent to the patients’ treatment room at the OncoRay proton therapy facility.

Building on their joint prior experience with the 0.22 Tesla MRI scanner, which is usually used to examine extremities, the manufacturer ASG Superconductors, is now producing a mid-field-strength open MRI device with a magnetic field strength of 0.5 Tesla, which is specifically adapted to the requirements of real-time MRI-guided radiation therapy by the Alberta Health Services LINAC-MR group and its spin-off company MagnetTx Oncology Solutions. Engineers at MagnetTx Oncology Solutions are also developing the gantry that is required to rotate the MRI scanner as well as the image processing methods for automatically tracking the tumor in real time. The design and manufacture of the entire 30-ton device is currently in full swing. In summer 2022, the team plans to incorporate it in the actively scanned, clinical-akin experimental proton beamline at the OncoRay facility.

”It is very exciting for ASG Superconductors to be part of this project in collaboration with HZDR and MagnetTx,” said Marco Belardinelli ASG Paramed MRI Unit Director and adds, “seeing our MRI and MgB2 superconducting technology used as a key component in new and innovative applications such as this one, which will ultimately benefit the patients and the medical community, makes us proud and even more confident we are moving in the right direction.”

“Our partnership with HZDR and ASG has been extremely positive.” said Mike Cogswell, MagnetTx President and CEO. “We look forward to continuing to work together to improve the cancer treatment industry.”

“Thanks to this collaboration between HZDR and international industrial partners, my team and I are a big step closer to our goal of bringing significant innovation to the field, especially to real-time image-guided proton therapy,” says Aswin Hoffmann, describing his optimistic outlook.