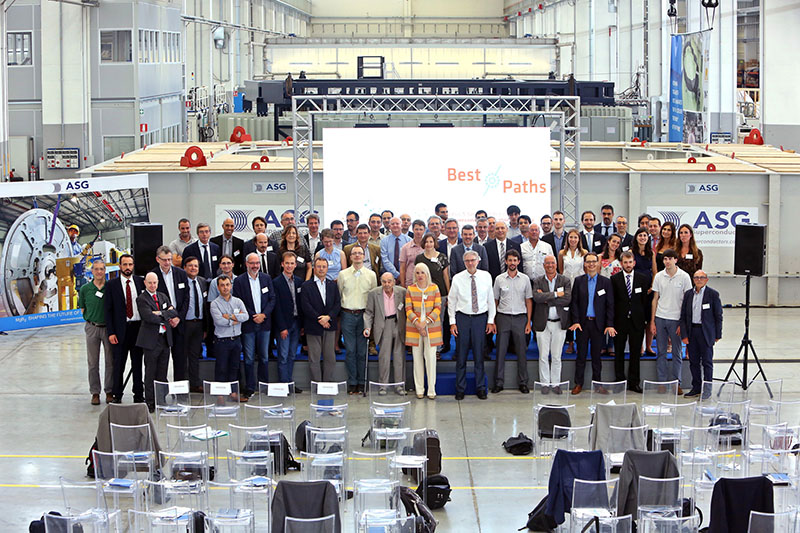 La Spezia (Italy), 5th July 2018 – Today major cable and wire manufacturers, including Nexans and Columbus Superconductors, together with transmission system operators such as Terna and Réseau de Transport d'Électricité (RTE), disclosed the results of ground-breaking research on a superconducting cable system. The technological solutions for superconducting wires are setting new records. They are able to carry 500 times more electricity than copper wires and can transport up to 3.2 GW of electric power. The experts of 10 European countries designed a cable system that includes high-voltage insulations and terminations.
These results were presented to 60 participants at an international workshop in La Spezia, hosted by ASG Superconductors and co-organised by Nexans and IASS Potsdam. The breakthroughs were achieved within Demonstration No 5 of Best Paths, the largest research project funded by the European Union in the energy field in the last decade.

Christian-Eric Bruzek, Senior Project Manager at Nexans, said “We have for the first time designed a high-voltage superconducting cable system capable of operating in direct current, while all the existing projects only deal with alternating current. The most challenging tasks is to manage the connection between the cable and the existing grid using high-voltage terminations. This will set the standards of the future for high-voltage grids.”
The other innovation in the superconducting technology presented in La Spezia is that the cable is manufactured using magnesium diboride as a superconductor, which is very economical to produce.

Giovanni Grasso, Sales and Business Development Manager Columbus Superconductors, said “The reliability of our magnesium diboride wires has already been demonstrated by a number of full-scale prototype devices, such as MRI systems, induction heaters and fault current limiters. At Columbus we are committed to increase the performance of these wires and we work on making them mechanically robust, reproducible and low cost. Thanks to projects like Best Paths, the transition from demonstrators to products in the energy sector will be faster and targeted to customers’ needs.”
Several transmission system operators (TSOs) have been involved in the project. As future customers, they articulated their vision on future grids in a panel discussion.

Massimo Rebolini, representative of Terna and Chairman of CIGRE Italian National Committee, said “Terna has always been interested in R&D activities on superconductive cables with the first experiences dated back to the nineties. According to the strategies of Sustainable Development, we have continuously monitored research progress to overcome technological barriers for a complete engineering of power transmission superconductive cables. Criteria usually adopted by Terna for the use of innovative cables are based on four pillars: technological aspects, environmental criteria, resiliency and grid integration. Part of them have been investigated and addressed in the Best Paths project.”

Jean-Yves Astic, R&D program Manager, Réseau de Transport d'Électricité, said “To get TSOs on board for investing in superconducting links, we would need customised use cases, ranging from 63 to 320 kV including details on the exact costs, practical system operation as well as long term maintenance.”
The next step for the widespread use of this technology according to the project team would be to develop testing guidelines for high-voltage direct current superconducting cables together with a consortium of manufacturers to ensure safety and quality standards.