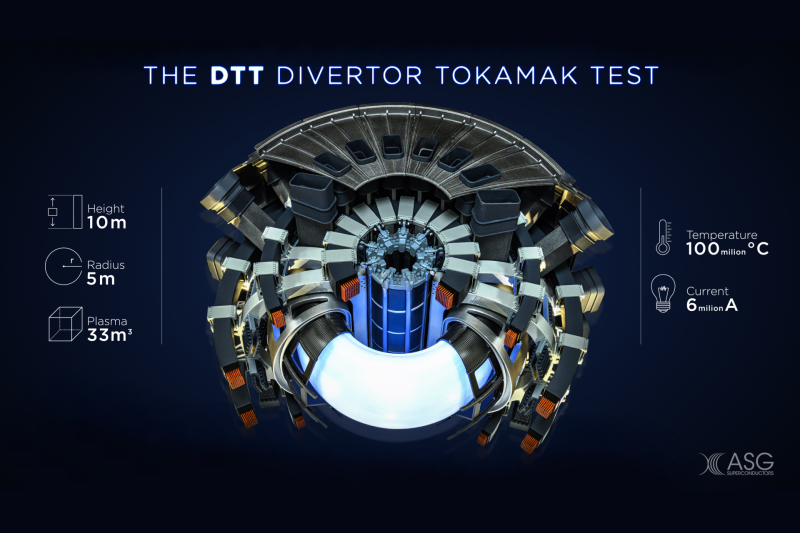 Italian research and industry participants are working on a fusion machine to produce clean, safe and renewable energy using the same process as the sun and stars: the magnetic heart of ENEA's Divertor Test Tokamak (DTT) will be composed of 18 superconductive maxi magnets that ASG will produce in its Ligurian plants.

Genoa, La Spezia, Italy, April 8, 2021 – Italy is working on the future of fusion energy with the goal of producing renewable and safe energy with the same process as the sun and stars: the machine called DTT – Divertor Tokamak Test is under construction in the ENEA Centre in Frascati and ASG Superconductors will make its magnetic heart composed of 18 superconductive toroidal coils (or TF Coils).

ASG, a Malacalza family company based in Liguria, will design, develop and produce the sophisticated Magnets in Niobium-Tin (Nb3Sn) which, thanks to careful selection of materials combined with innovative production processes, quality control systems based on computerized mechanical and magnetic measurements, treatments in high-tech furnaces for the thermal reaction of conductors and welding processes to extremely stringent geometric tolerances - will be able to contain and stabilize the plasma.

The 18 superconductive TF coils, which measure over 6 meters and weigh 16 tons each, will be produced in a 48month period at the ASG La Spezia plant where, alongside the manufacturing of the toroidal coils of the ITER project, technicians and workers will work together with engineers, physicists and materials experts from the historic ASG headquarters in Genoa.

A technological curiosity of the production process is linked to the magnet testing phase that will be carried out in vacuum chambers under the temperature conditions (-273°C) at which the coils will have to operate, to verify the quality of manufacture and the coils’ ability to resist the mechanical pressure exerted by the magnetic field that they themselves will generate when the DTT comes into operation.

The order for the realization of the 18 maxi magnets was assigned to ASG Superconductors following an international tender for a total value of 33 million euros. The DTT fusion machine is part of an international scientific and industrial endeavour which sees Italian research and industry participants engaged on the front line with institutes such as ENEA and companies such as ASG Superconductors that has produced superconductive magnets also for other fusion energy projects such as ITER (France) and JT-60SA (Japan).

The Italian DTT infrastructure will not be the largest in strictly dimensional terms but will be a focal point of scientific research and industrial and material-science expertise for the realization of fusion for reliable and sustainable energy.

The DTT machine generates energy by converting the heat released by the fusion reaction: it is a question of compressing a deuterium and tritium gas until it forms a plasma that must reach and maintain temperatures equal to 200,000,000°C - about 10 times the interior temperature of the Sun. This heat is then converted into steam, which in turn drives a turbine for the production of electricity.

The DTT, used for developing techniques for stabilizing the plasma over time will be, along with ITER in France and JT-60SA in Japan, among the most important predecessors of DEMO, the first fusion-based power plant. On the path to the Green Deal - essential as a result of the climate emergency - the production of energy by fusion represents a fundamental step for the energy mix of the future that according to the most authoritative studies, such as that of the University of Berkley, cannot be based only on replacing fossil sources with traditional renewable energy sources such as wind or solar.

ASG has developed and built superconducting magnets for the most important fusion energy projects and experiments in Europe over the last 40 years. Also, it is involved on major projects such as ITER—the largest international fusion collaboration. Under the co-ordination of Fusion for Energy (F4E), managing Europe’s contribution to ITER, ASG has been involved in the production of toroidal coils, in addition to the fabrication and engineering of poloidal coils. ASG collaborates on the theme of fusion also with the British agency UKAEA - United Kingdom Atomic Energy Agency. The skills of ASG are not limited to fabrication of magnets, but also include studies and consultancy on material properties, mechanics, cryogenics, magnetic fields, industrial engineering and project management throughout the supply chain from design to installation.

The know-how gained by ASG in these particular types of projects is not only linked to the present and future of fusion but will contribute to real innovation in everyday life thanks to the development of new superconductive cables and systems. These innovations will in fact be revolutionary in industrial processes with high-energy consumption and for smart and future electricity grids.