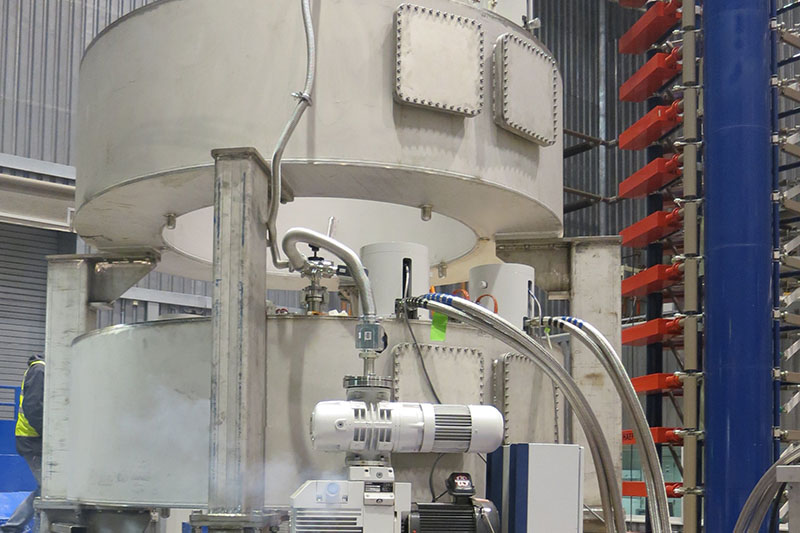 The fault current limiter is a solution to the need of the utility networks to cope with the increasing production of energy from renewable sources, easing their connection in the network itself and reducing the risks associated with possible surge of faults. The innovative device uses MgB2 wire and it’s based on ASG's know-how in the design and manufacture of magnets for research in particle physics. Genoa, February 8, 2018 - ASG Superconductors, a leading company in the field of superconducting magnets, has designed and demonstrated the full functionality of an innovative superconducting fault current limiter device (SFCL). This 36kV system has been "type tested" in the independent laboratories of the IPH in Berlin, under short circuit conditions more severe than those typical of a real power grid. The SFCL system uses the new superconducting wire in Magnesium Diboride - MgB2 and it’s an inductive system, acting as a variable impedance component. Under operating conditions the device is totally "invisible" to the network, thus avoiding dispersions or disturbances, but is able to convert itself instantly and automatically to a very high impedance (ie the ability to limit the fault currents) when a short circuit occurs. The system works in complete absence of cryogenic fluids, otherwise essential with traditional solutions, and reduces the need of maintenance. The use of the superconducting wire in MgB2 also makes the system more efficient compared to a traditional equivalent one by reducing consumption. The superconductor technology allows the SFCL device to be constantly operational even after an intervention in the event of a short-circuit on the network, with a recovery time of milliseconds, a unique feature that distinguishes it from other solutions proposed to the market and that would allow the utilities to progress significantly in terms of continuity of supply, and to avoid the costs of restoring the damaged network components in the aftermath of a short circuit. Studies of the total cost of ownership confirm that a SFCL system is often the most cost efficient solution to the problem related to the growing short-circuit currents in medium and high voltage power grids. The inductive technology allows the operating voltage values of the SFCL device to be scaled up without changing its basic operating principles: further to the 36kV system, ASG has already designed a 123kV system suitable for operation in transmission networks in most of European countries critical systems