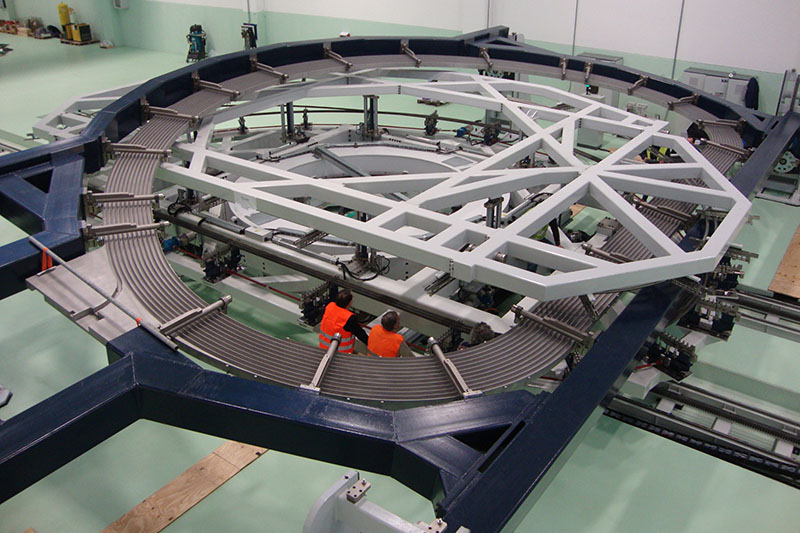 The order, awarded by Fusion for Energy, was obtained by ASG as part of a consortium led by Iberdrola and Elytt Energy ASG Superconductors' superior technology and industrial ability have once again been confirmed. After having been a supplier to CERN's LHC in Geneva, the company is now playing a key role in the realization of ITER, the largest project in the world that seeks to harness nuclear fusion as a clean and sustainable form of energy. The Genoese company will be working on ITER for at least six years (80 percent of the activities covered by the contract will be handled by ASG itself), a collaboration which could lead to the creation of some 100 new jobs for qualified professionals. ASG President Davide Malacalza: "We have once again been confirmed as among the sector's leaders worldwide. Collaboration with ENEA and Institutions has been fundamental." Genoa, July 19, 2010 - ASG Superconductors, a company owned by the Malacalza family active in high technology and superconductivity, won an order for the construction of 10 magnetic coils for the ITER nuclear fusion reactor. The contract, whose value is €156 million, was awarded by the Fusion for Energy agency following a very complex international bid process to a consortium formed by Iberdrola Ingenieria y Construccion (consortium leader), ASG Superconductors and Elytt Energy. ITER (International Thermonuclear Experimental Reactor) is the biggest project in the world that will illustrate the potential of nuclear fusion as a source of virtually limitless energy that is both environmentally safe and sustainable. It is one of the greatest global research efforts, the result of collaboration between the EU, the USA, China, Japan, India, Russia and South Korea - areas that together represent more than half the world's population. The signing of the contract took place in Barcelona at the headquarters of Fusion for Energy (F4E), the European agency charged with managing the collaboration with European industries and research centers in order to develop and produce technological components for the ITER project. ITER will be an experimental reactor built for the purpose of reproducing the process of nuclear fusion in the sun and stars. Previous experiments demonstrated that it is possible to replicate it on Earth, even if for only a few seconds. ITER's goal is to make fusion possible on a scale and in conditions that demonstrate the scientific and technological feasibility of nuclear fusion as a source of energy. "For ASG, the acquisition of the ITER contract is particularly significant for it confirms our position among the world leaders in the sector," said ASG President Davide Malacalza. "We are happy to partner with Iberdrola and Elytt Energy, with whom we have created a winning alliance, and appreciate the importance of our continuous relationship with ENEA and the institutions of the Italian government. I believe the ITER project is an example of virtuous collaboration between the public and private sectors. The new order, together with others the company foresees winning in the immediate future, could have a significant impact on job creation in the Liguria region," Malacalza concluded. The contract with ITER calls for building 10 "winding pack" coils of fairly large size (15m x 10m each, with a weight of over 100 tons each) that will be produced in ASG's plants. About 80 percent of the value of the contract will be for productive activities carried out directly by the company based in Genoa. ASG is the only Italian industrial company - and one of the few worldwide - to have the know-how and experience necessary for the production of the technological infrastructure that will be the heart of the ITER reactor. ASG's activity in the context of nuclear fusion began with the construction of superconducting magnets for the Tore Supra reactor (active since the early 1990s and which will de facto be replaced by ITER in Cadarache, in the south of France, some 70km from Marseilles). Immediately afterwards, ASG realized the FTU reactor for ENEA, marking the beginning of a collaboration that has continued for over 20 years. The company, which also supplied magnets for the Large Hadron Collider (LHC) at CERN in Geneva, maintains contact and collaboration with the principal research institutes and centers, both in Italy - like CNR and INFN - and in Europe - including KIT in Germany and CEA in France. "The contract we signed today is the representation of a relationship built on trust and the result of concrete collaboration with the principal European and Italian research centers. It represents a new, important, milestone on the technological path begun in 1958 from inside the Magnets Unit of Ansaldo and followed even after the privatization of 2001 with the acquisition of the company by the Malacalza family." ASG Superconductors, a company owned by the Malacalza family with headquarters in Genoa , designs and produces conventional and superconducting magnets for research in high-energy physics, nuclear fusion, optimization of electricity grids and medical applications. The company distinguishes itself internationally for its know-how in designing, building and testing superconducting magnetic systems. Aware that it operates in a highly specialized and continuously evolving sector, the company continues to invest in increasing and developing its productive capacity and technological know-how. ASG Superconductors collaborates, in Italy and abroad, with the principal players in the industry and with the leading international scientific research institutes and centers. Press contacts: Luca Pezzoni Hofima (Malacalza Financial Holding) External Relations